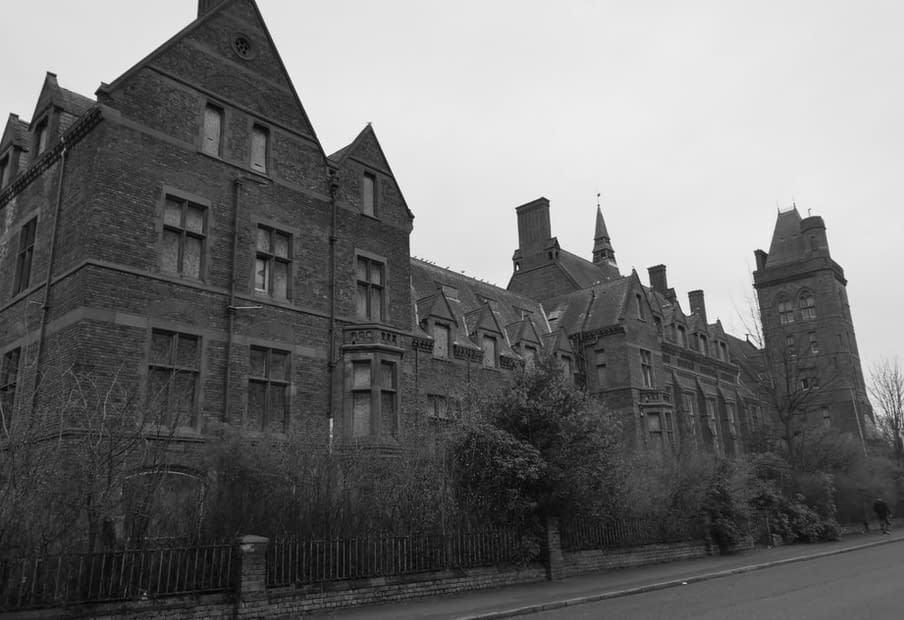 As with most of our ghost hunting events, we always carry out a site visit for Health and Safety and Risk Assessments etc. Pretty dull stuff but we have to make sure that our fellow ghost hunters are going to be safe in the venues we select.

Newsham Park had been requested many times by people since we started back in April 2018 and its always been high on our list to get a date. Sadly, every Friday and Saturday is fully booked, for the next two years, by the two biggest Ghost Hunting events companies in the UK but we didn’t get deterred and found an available date.

Once we have secured the date and paid the required deposit, we arrange a site visit. Now February has been busy for iHaunt and the owner of Newsham Park, so it was agreed, we would conduct our site meeting Saturday 23rd February 3.30 pm.

Stephen and I arrived at 3.20 pm so I thought we would walk down from the building to take photos of the street signs as you do. 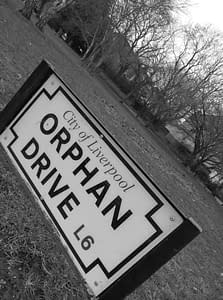 Now you might be wondering why I am writing this blog? Well when you have a tour of the place usually nothing unexplained happens, that’s not to say the building isn’t haunted but may not be the right time of day for the hauntings to be happening. We all know paranormal investigation relies profoundly on patience. Newsham Park is very much different in the day, and it doesn’t hold back.

We ventured through to the Old Schoolhouse which was eerie but had the most modern feel of the buildings interestingly there is a film set in this building from one of the TV/Film productions that have been filmed, at Newsham Park. Having taken a few photos, we moved on to the Morgue which was also a Chapel, in here as you would expect were the body fridges with the Metal Slabs that are surprisingly heavy we couldn’t imagine the weight of them with bodies on. It has some beautiful stained glass windows that can only be seen from the inside. It is hard to believe that this building has seen so many deaths in various locations, but these are evident from all the equipment that has been abandoned in this building.

OK, so after the Morgue we were shown the swimming pool, and outside concrete slab area that has the owner stumped, we ventured into the pitch-black Nursing Home area. Professional as we are, we had forgotten to take a torch, luckily our phones saved the day. The are has three levels to it with the ground floor being the darkest. While looking in the vast amount of rooms you can see chairs laid out where Ghost Hunting Vigils have taken place from previous visitors and in one room was a metal slab trolley with a hinged steel box on the top. 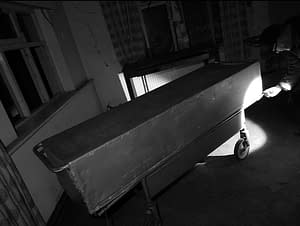 The metal casket to move corpses around Newsham Park Hospital.

The owner John showed us this and explained why it has the box etc. After closing the lid, John stepped away from the trolley, and it started ‘Tapping’ almost like someone was trying to get out. Asking John if that was normal, his response while rapidly leaving the room was ‘No.’ We weren’t too far behind him as we also vacated the room.

During our walk around we were teased with the ‘Psycho Cinema.’ A saying I found interesting this was a room with seats laid out in a traditional cinema style and a giant projection screen. A space where all patients, were taken to, and ‘strapped’ to the chairs and they were allowed to watch a film to see and stand in this part of the building was surreal. 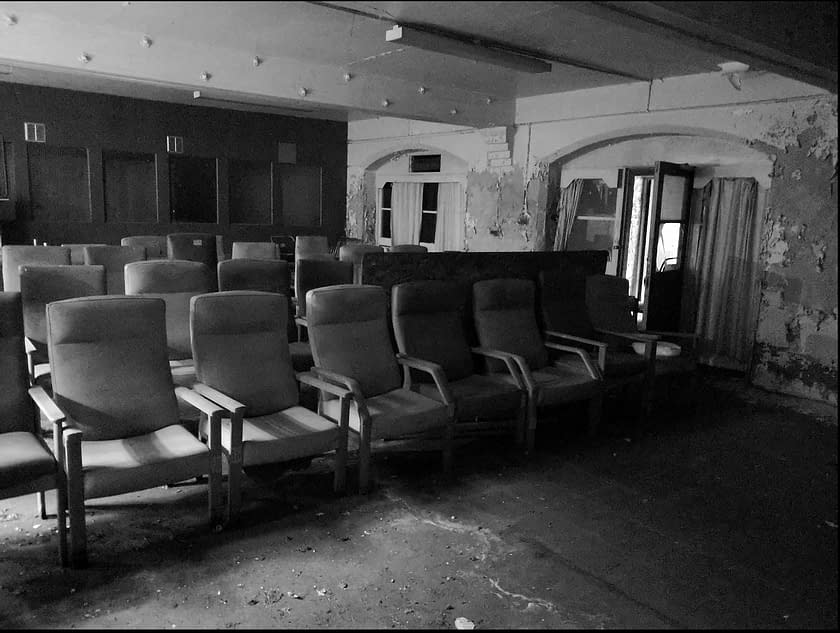 Leaving this room, we went into the room adjacent where there were a cage and chair and an old leather style box case. As all three of us went into the room we heard a thud john casually said “doors just closed on its own” followed by “that happens all the time” to which I replied, “No, it doesn’t!”

The door that closed on its own was a heavy wooden door, all three of us did some tests on the door to see if there was any way it could have closed, and we found it wasn’t going to move unless someone or something physically touched it. We were still surprised as we turned into a pitch-black corridor.

Having left this area, we saw the guard dogs, they may look cute but are not friendly, so we moved swiftly back into the main building. 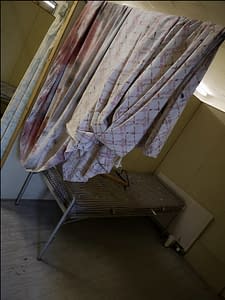 Back in the main building, we were about to skip some areas due to wanting to visit a specific location. Then we decided that we should look at everything.

We walk around some open-plan wards with bloodstained curtains and beds with original straw mattress’ was very surreal that the people who occupied these beds, were classed as the ‘Safe’ ones.

Newsham Park still houses pretty much everything from when it, was sold even the electrocution machines. To think that is a type of therapy is difficult to comprehend as I feel you’d have to be some sort of lunatic to administer that treatment, maybe I’m wrong?

So as Ghost Hunting venues go, this has everything too, to make even the most experienced Ghost Hunter shiver.

As we serpentined through many wards and up and downstairs, we eventually arrived at a Corridor full of cupboards where the orphans we locked as punishments. Many people have reported hearing children’s voices in this area, and I can assure you the corridor has a vibe. The owner asked if I wanted to go in one of the cupboards, “of course’ I said. Why? I have no idea, 10-15 seconds later I opened the door to ask if some children had just walked past the building to which the reply was we did not hear anything out here. 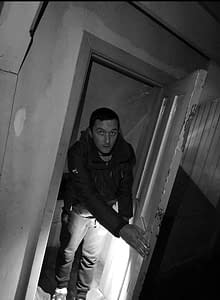 So we moved on again, visiting wards with history and even stood where Ian Brady’s bed was in his department. While the owner and Stephen were talking, I had to stop them as I heard footsteps coming towards us. This place was beginning to freak us out.

We finally went into the ‘Autopsy Room’ its a very dark cellar style room with some history associated with it. One area of this place made me feel nauseous, I don’t usually feel things like that, but I think it was the thought of what happened to the corpses in this part of the building. A sequence of events occurred every time a body, was taken to this area, and even the fridges remain ( I got locked in one). 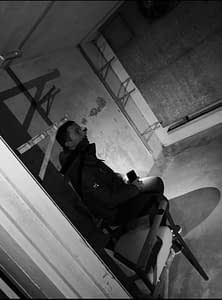 After all, this it has now put me, my team, in a challenging position to choose only four areas of this vast building to explore and share with you. We sat in the car for a good 15 mins going through everything we experienced.

Please do join us for our Ghost Hunt of Newsham Park Abandoned Asylum and Orphanage on Thursday 18th April 2019 9 pm until 4 am if you dare. I can’t promise what will happen but if our Site Visit was anything to go by, we’ll not be disappointed.